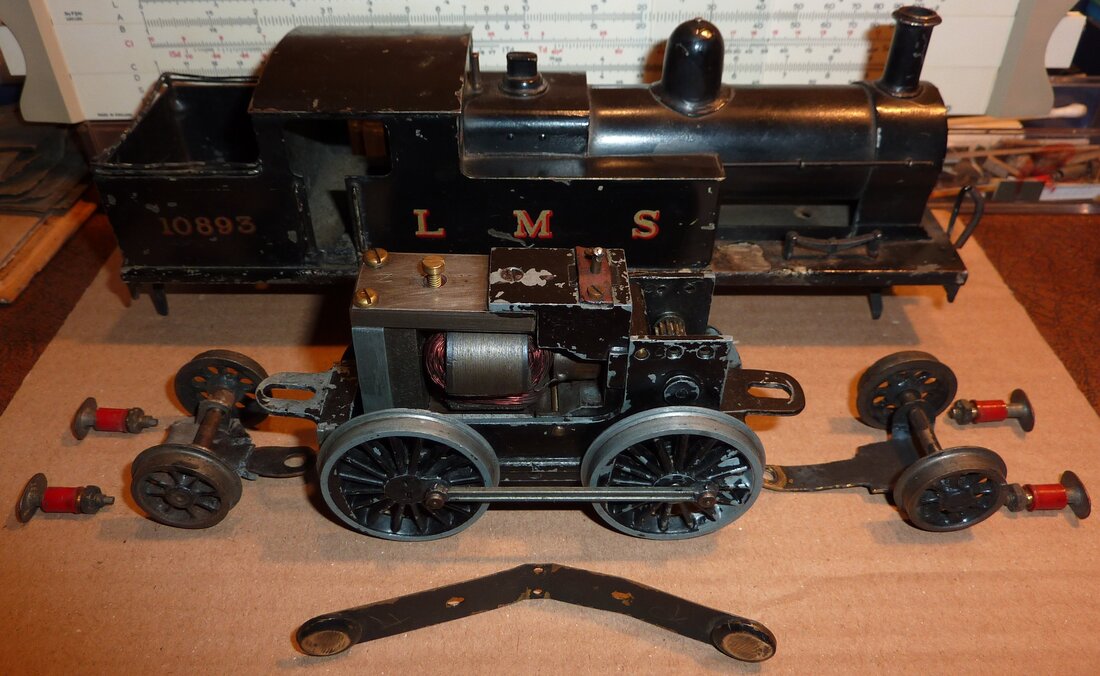 The underside body of a Leeds Model Company (LMC) 2-4-2 just starting restoration; all four steps were broken leaving stubs on the underside of the footplate. A pencil gas torch was used to quickly melt the solder and remove the stubs, and the surface is now being ground clean and smooth in readiness for a set of four LMS white metal steps to be fitted, these new steps will have strengtheners fitted behind as there is plenty of room available on the underside. There is also some corrosion to be dealt with in places using mechanical means and anti-rust compound to create a nice surface ready for priming and painting. This loco is mostly intact with good motor, wheels, and surprisingly little corrosion under the original black paintwork; thus my immediate plan is to preserve as much of the original paint as possible rather than a complete stripping back to bare metal, as is often the case with LMC models sporting contamination under the paint. Well, we'll see how it goes and how much of the original loco can be preserved.

Rubbing down (above) the poor areas of what I thought was original paint has produced something of a surprise: grey primer or an undercoat of an oil-based lead type with a noticeable aroma when sanded, and quite possibly an old automotive type paint; however, there is no evidence of this grey paint underneath or inside the body shell, and the forward running plate around the springs and around the smoke-box front is also lacking grey paint, so the detective work is on and I have referred the matter to The Leeds Stedman Trust concerning this grey paint because LMC offered paints to customers between 1922 and 1933 and the range included a light grey and a dark grey. I suspect what I have here is a clever repaint of the original, the grey paint could still be LMC even if the paint had been stored for years; unfortunately, a LMC colour swatch is not to hand to determine the likelihood of LMC paint. This discovery has changed the project somewhat, and I shall continue with the process of rubbing down to a smooth finish in advance of applying my own primer, particularly as so much bare metal has appeared; this will be followed by a light grey undercoat, and then the top coat layers which may not be black, as an interesting project is mooted to produce a colliery railway with the locomotive in private hands. I did wonder about the viability of this 2-4-2 on colliery work but the wheel arrangement does lend itself to tighter track radii, and as the colliery envisaged is one of the smaller Welsh concerns output is unlikely to demand the power of an 0-6-0 or 0-6-2 to handle the short train lengths on a small 7mm layout. We shall see, and amid the present COVID-19 threat it is nice to have something creative about which to think and plan. 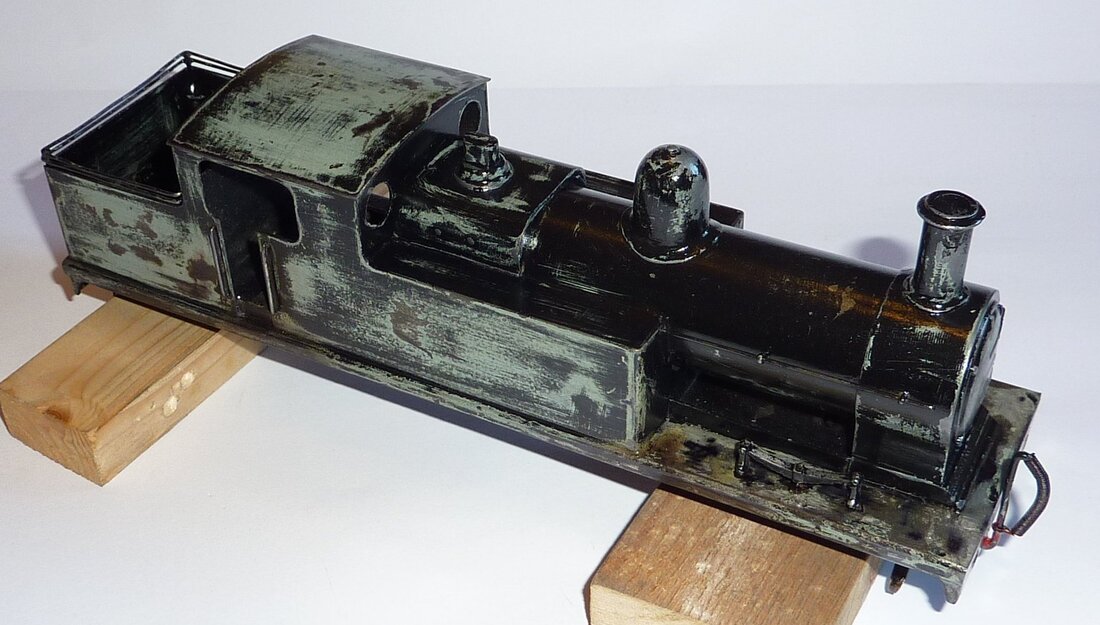 The information so kindly sent to me by David Peacock, Archivist, The Leeds Stedman Trust, confirms the grey primer/undercoat present on this model to be the work of a partial repaint carried out to a very good standard, and the LMS hand lettering was exceptionally well applied, so much so that I took measurement photographs of the lettering and numbering before sanding down. Standard Locomotives such as this Series Two (ex-L & Y) 2-4-2 originally factory finished in LMS black suffered from poor surface adhesion of the paint, this was the fault of insufficient preparation of the bare tinplate, resulting in the paint being applied over a contaminated surface that led to flaking and eroding paint during handling of the locomotives, evidence the frequency with which this fault appears on the tank sides: the natural fingers and thumb balance point when picking up the locomotive, and clearly evident on this model.

The image (above) may not look all that removed from the image previous, but a comparison will show a distinct glossiness to the image immediately above; this is the result, after much finer and finer rubbing down, of applying a rust treatment normally used in the preservation of old Land Rovers etc. The liquid is a pale bluish colour and applied quite liberally with a flat paint brush both inside and outside the model until the entire gamut of metal surfaces are so covered, thus the tinplate is sealed in every accessible nook and cranny. The liquid cures in a warm dry environment to a hard glassy surface that, after twenty-four hours or so, may then be primed, undercoated, and painted in the normal way; thus the model is future-proofed by preventing rust at the tinplate surface. So far I have only applied this treatment by flat brush; however, I will be experimenting by blowing this treatment through an airbrush with a large high-flow nozzle to reach into cavities that are difficult to access with a brush. Spraying will have to be done quickly, and the airbrush cleaned without delay, as the liquid starts to go off in minutes, so I will be using one of my basic airbrushes for these tests, and I will let you know the result of trying to spray this rust treatment in due course. Thanks again to David Peacock for his help at this stage with his bountiful LMC knowledge. 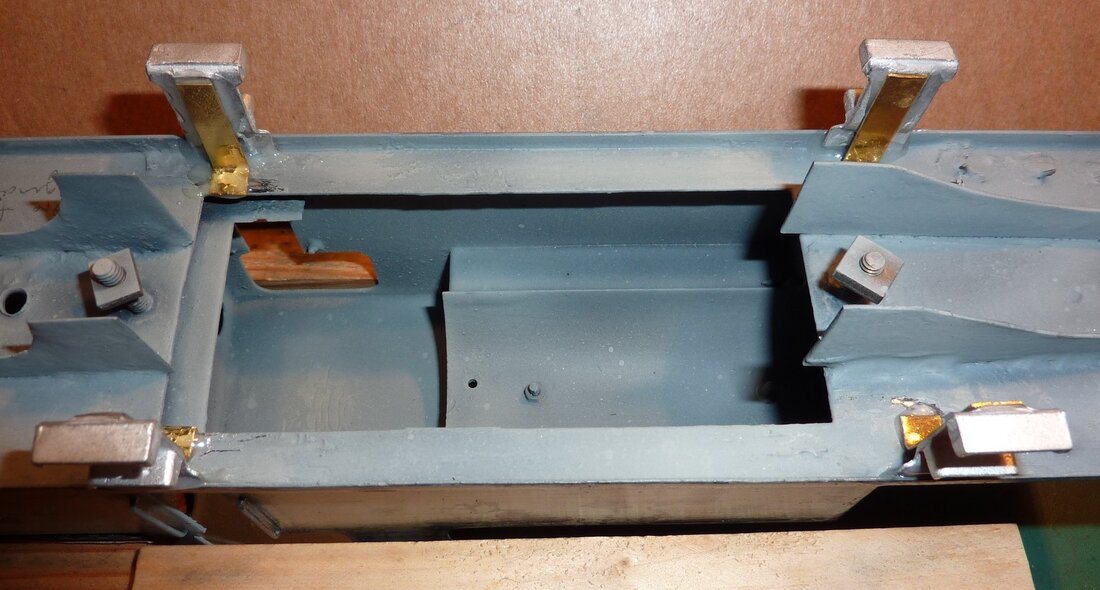 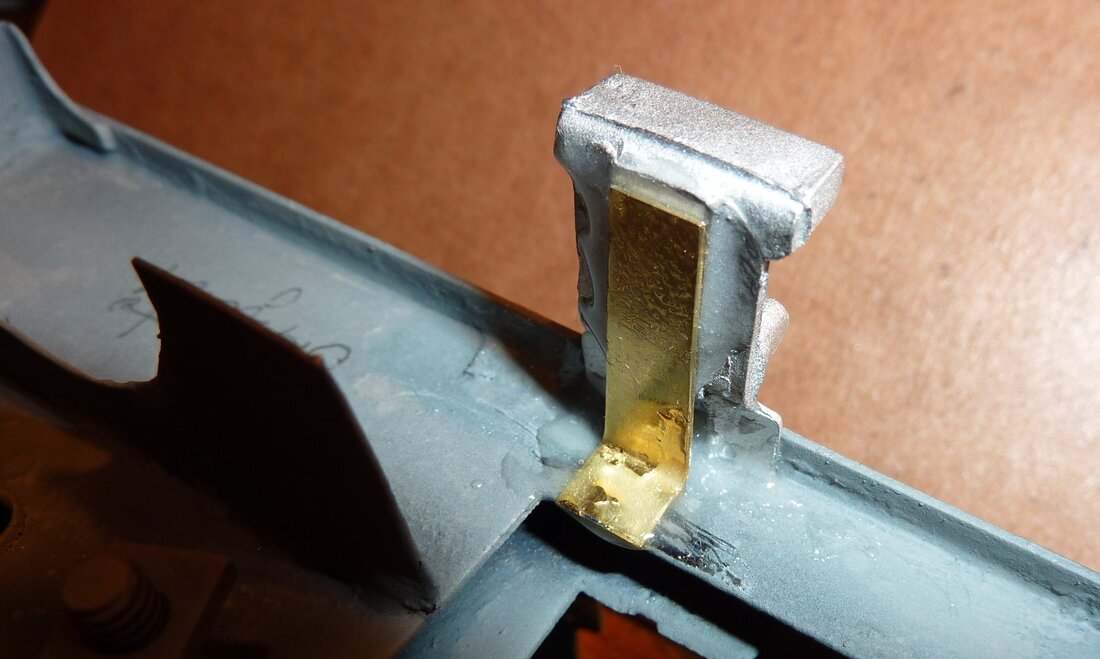 The above two photographs show the underside interior of the model now that the replacement white metal steps have been fitted; and to further protect the steps from accidental damage during handling four brass strips were cut from a 0.5mm brass sheet, each strip is 6mm x 24.5mm when cut, then one end is turned up to form a 5mm foot (see detail above) and fitted to the back of each new step to form a brace. The new steps and brass supports are secured to the underside using Araldite and left for twenty-four hours to cure, producing an immensely strong bond. Araldite 2-Part Epoxy is a mainstay of my work when needing a powerful bonding agent, producing excellent results provided you follow the instructions and mix the two parts correctly.

There has been hanging over this model a question of livery for the final restoration, this is because I have two of these LMC 2-4-2 L&Y locos in stock, this one is three-rail and the other has been converted to two-rail by some ingenious cutting and adaption of the wheel spokes on all wheels to provide insulation: looks like I'm not the only one who uses Araldite, as the adaption to the wheels by a person unknown clearly uses Araldite as the insulating medium, and this is taking the full weight of the loco which runs perfectly, so some very accurate work has been undertaken by someone in the past history of this second loco. Anyway, the result of all this examination and comparison of the two locos means the current coarse scale loco (above and below) will be restored as near as possible to LMC original appearance, including hand painting the insignia if I can satisfy myself with the result. The second loco (which you've not yet seen) has already undergone so much transformation to two-rail with fine scale wheels that I am considering a full repaint to LMS lined red livery, as a few did receive this attractive livery from the LMS after the Grouping; thus with so much already changed on the second model, during its past unknown history, I do not feel such a duty to replicate the LMC finish, and I think we can continue into pastures new. 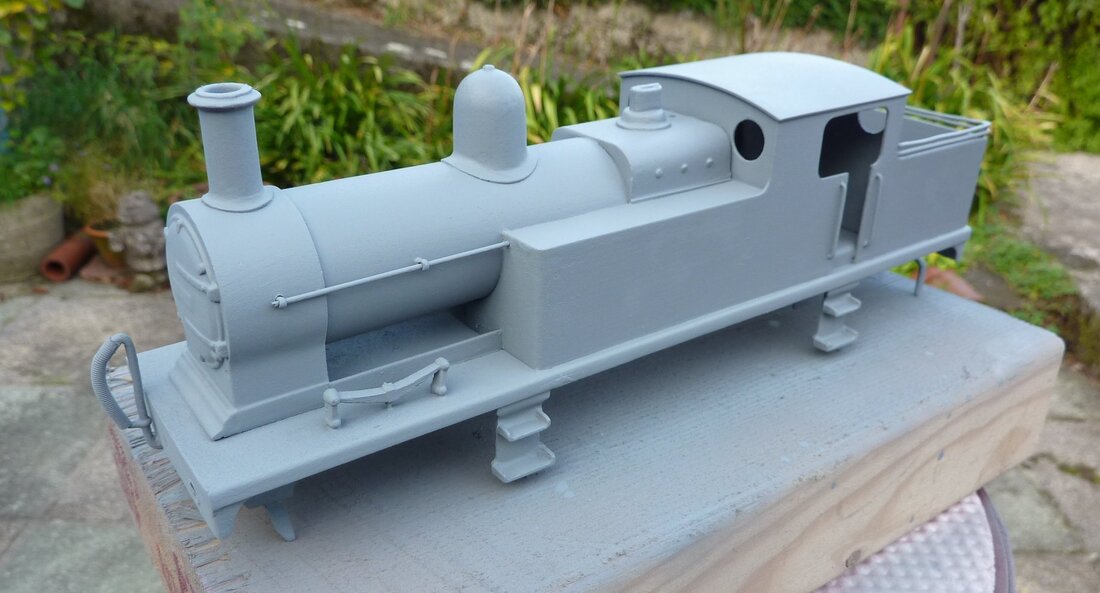 (Above) Unlike today, a day of wintry showers in September, we have recently had a few days of warmth, and calm still air making for once outside rattle-can spraying of grey automotive primer a possibility, and so I took outside my old wooden tripod, fitted my studio turntable onto the top, and with a brand new rattle-can fully mixed and ready for spraying, set about providing a good base of primer for the undercoat to follow; there was so much room on the patio space that revolving the turntable was not required and I simply walked around the loco building up an even primer coat; immediately afterwards I cleaned the rattle-can nozzle with thinner on a cotton bud as this augments the requirement to invert the rattle-can and clear the nozzle most effectively. The model was promptly returned to the studio to dry, and drying of this automotive primer for at least 24 hours (preferably longer) is essential: under no circumstances allow impatience drive you to attempt coats of undercoat or top coat until this primer is well-cured, unless you like the crazy paving affect appearing in subsequent layers. The overall result I am pleased with, and stood the model aside for a few days while I got on with other tasks; I will not return to this loco until my nose no longer detects curing primer, after which grey undercoat will follow, and eventually a replication of LMC black. You may be surprised that I use rattle-can primer at all; however, a new full can of paint, with plenty of pressure still in the can, and a careful spraying technique, produces excellent outdoor results in still warm air. I never used rattle-cans inside the studio.