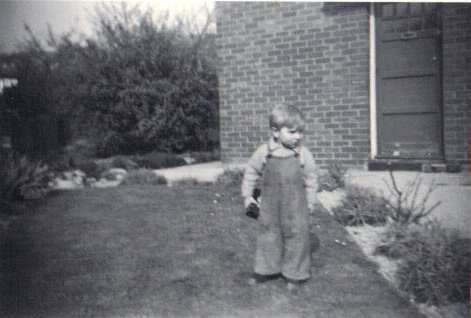 Post-war 1950s Britain. Behind those trees a good view of the GW & GC Mainline. Locomotive already in hand!
My father was a highly skilled mechanical and electrical engineer who served an apprenticeship with a well-known engineering firm before the Second World War; as an apprentice his first job was to make his own toolbox - I still have that toolbox in my possession, and it is still as strong and useful as the day my father completed it in his youth, between the two world-wars: a great age of British engineering.

Therefore I grew up with engineering, my father coming home just after six o'clock of an evening with that unmistakable pleasant aroma on his clothes of an engineering workshop, of machinery and warm oil, and little twists of metal swarf in his trouser turn-ups - much to the annoyance of my mother on washing day! After his evening meal there would often be somebody's wireless or television to repair upon a blanket thrown over the large table; a humming carcass with its glowing valves exposed, much probing with his voltmeter until the fault was traced to a valve or some other component, the repair effected by replacing a valve from his stock of parts, or else the soldering iron appeared and was plugged in to heat up, and the repair effected by soldering in a new part. From quite a small age I would stand beside the table and stare up at the proceedings; eventually the wireless or television came back into life and was returned to the owner. Before I was born my father had built upon that same table his first television set, and the neighbours had gathered around to see the 1953 Coronation upon that small screen. Copies of Practical Wireless surreptitiously appeared from the inside pocket of his overcoat; and when he was not doing something mechanical or electrical he loved his garden, and would spend hours in his greenhouse at the bottom of the garden growing things from seed, or else planting out, or digging, the familiar clump clump clump of his black heavy wellingtons upon the garden path as he came back up to the house for a cup of tea and a cheese sandwich around mid-morning of a weekend. He was always an early morning riser, usually up making tea by six o'clock, even on a Sunday; and he nearly always went to bed around ten p.m.

When I was seventeen my father taught me to dismantle and rebuilt the engine of my Ford Corsair - the earlier straight four 1500cc; not the famous V4 of the later models. Over the years I learnt many things from him, not the least being his methodical approach, prowess, and ingenuity at problem solving; skills which I regard as the cornerstone to my own work. Although my father was taken ill and passed away within the space of a fortnight when I was twenty-years old he is never far from my thoughts, particularly as many of the tools I use daily were his tools, and I hope that through me something of his life and skills is continuum in the present day.

My own life is a mixture of professional artist, painting, weathering, and restoration, with a noted interest in the Leeds Model Company (LMC) because I can see parallels between Rex Stedman and my father in their approach to their work: they were both borne of an age, an era that produced a certain stamp of British engineering and creativity in every field.

A few appropriate words now about restoration: I have over past decades restored quite a number of 4mm models, namely Trix; Hornby-Dublo; Wrenn; Graham Farish; and early Tri-ang. Generally, locomotives arrive in various states of disrepair ranging from crude three-rail to two-rail conversions, to relatively straightforward restorations where years of loft storage is the main ailment of a 'non-runner' to emerge into the daylight through the loft hatch. Restorations have sometimes involved ingenuity to overcome missing or broken parts, or to provide a more acceptable method of converting to two-rail, it all rather depends upon the nature of the model presented, and what is required, before deciding the best method forward; this is equally true of cosmetic restoration as it is true of mechanical restoration, and upon that subject similar considerations apply; in fact restoration is many faceted, and each potential restoration must be assessed as an individual with regard to the extent with which restoration should be undertaken, particularly when considering the value of the item in hand: that patina of many decades may have to be preserved and local restoration confined to those areas defined in need of restoration; whereas, in other cases the paintwork is so appalling, with corrosion and flaking paint parting company from the contaminated metal, that only a complete strip down to bare metal and building up again from correctly applied primer will preserve the item for the next generation to come. Regardless of scale involved it is better to think in terms of having stewardship of these models that will in most cases outlive us.